To Saudi Energy Minister Abdulaziz bin Salman, the coronavirus is a “house on fire” — treat it with a garden hose and risk losing the building, or call in the fire brigade. This week, those long crude will be counting on the Arab prince to call in firefighters to save the house called oil from burning down.

As Monday’s trading got off in crude, both the U.S. West Texas Intermediate and U.K. Brent benchmarks plunged more than 2% in Asia, with investors fretting over the global contagion from the Chinese pandemic, amid a spike in infections in South Korea, Italy and Iran. Even before Friday’s settlement, there were signs that the two weeks of back-to-back gains in oil were over, as the market labored under the weight of new global cases from the so-called Covid-19 outbreak. 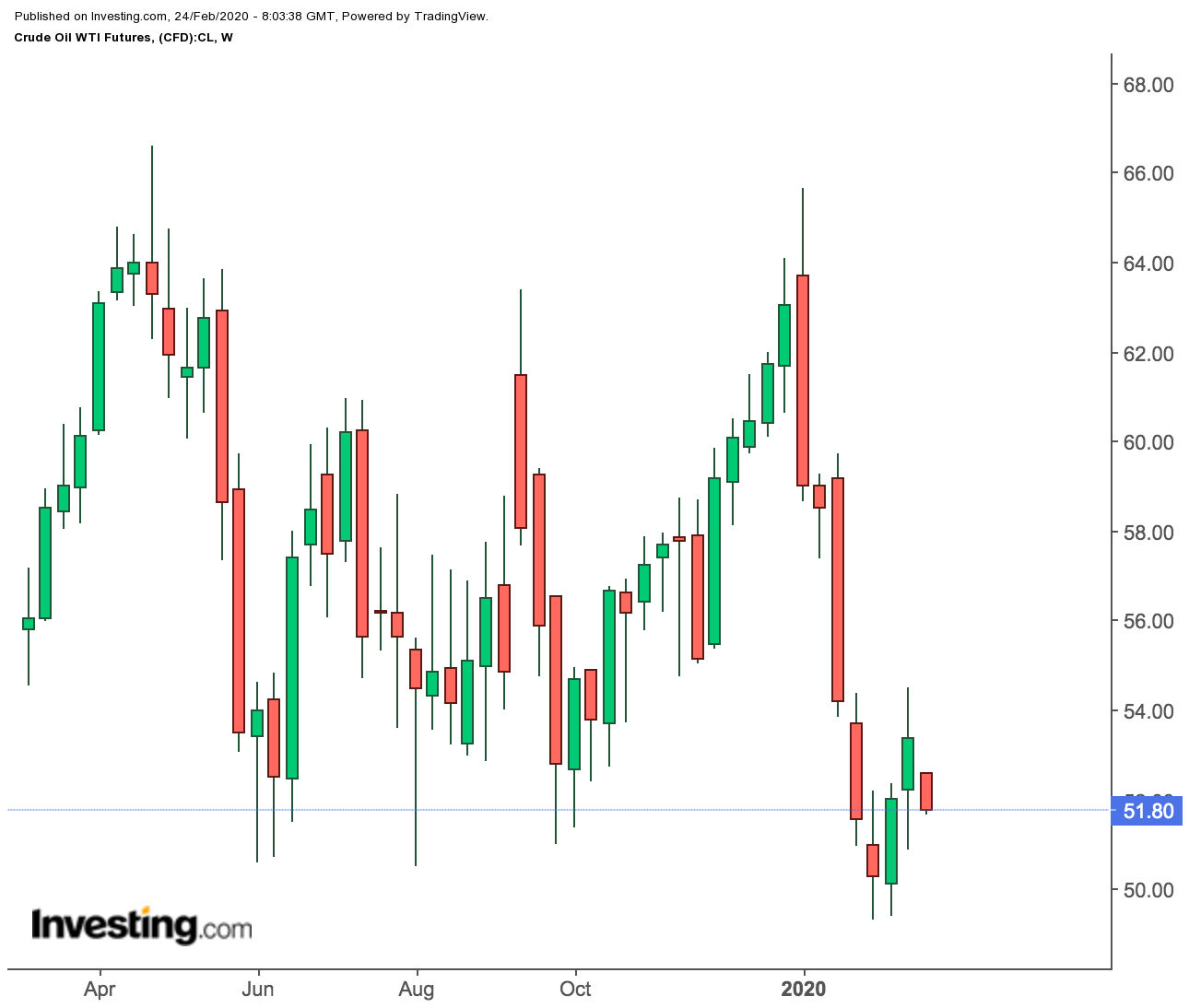 With gold, there was hardly any such worry: the yellow metal seemed on the way to touching $1,700 per ounce as investors of all sizes and stripes piled into the precious metal as a hedge to the virus. Last week alone, both gold futures and bullion repeatedly pushed past $1,600 to set one seven-year high after another. 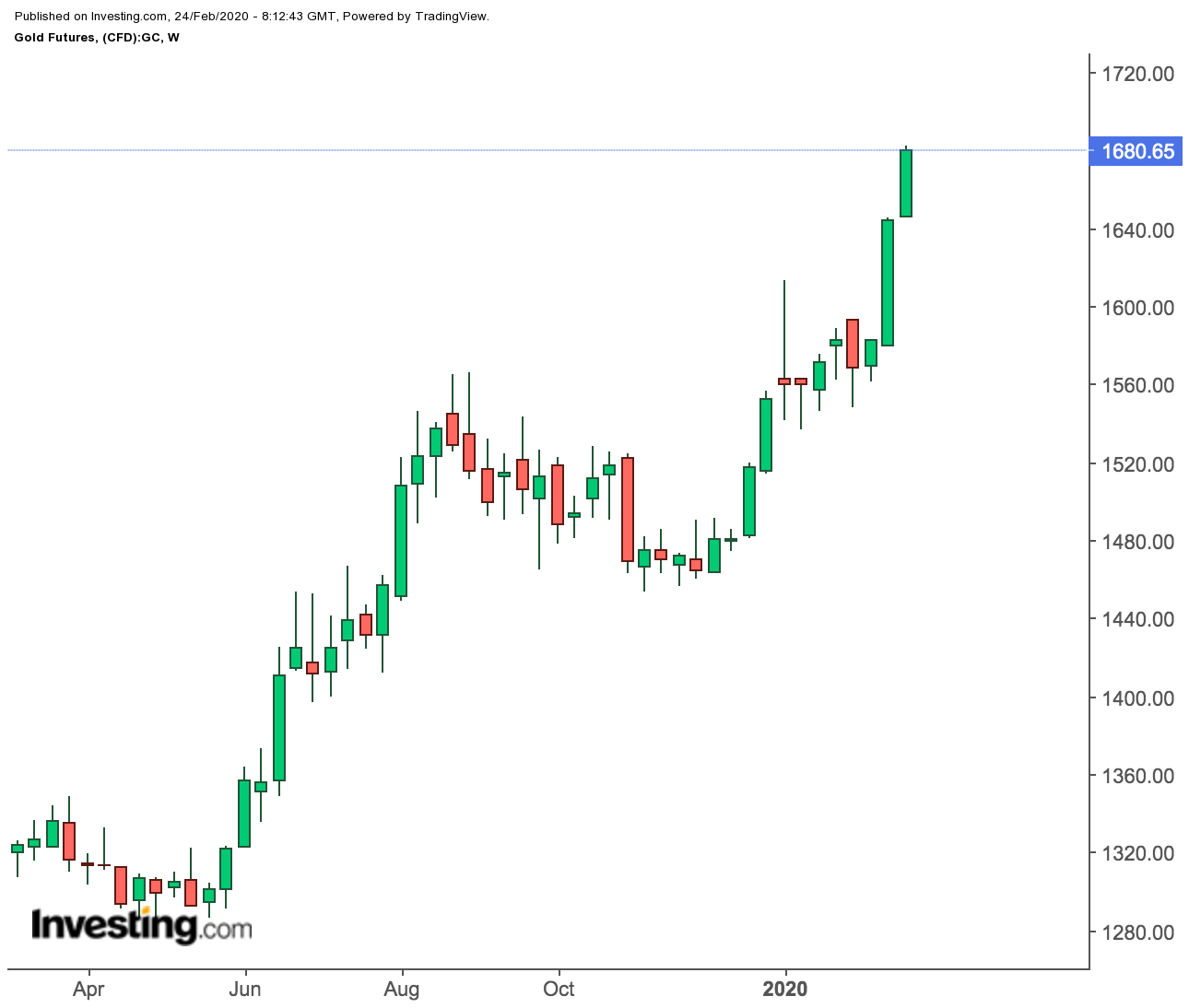 “Markets remain gripped with fear over the coronavirus outbreak in and out of China and economic data is beginning to show the extent of the epidemic’s impact,” Dominick Chirichella, director of trading and risk at the Energy Management Institute in New York, said at the weekend.

U.S. services Purchasing Managers Index’s reading for February dropped below the 50-mark in February, indicating contraction for the first time since 2013. The U.S. Composite PMI, a related reading, fell to a multi-year low of 49.6 — a big miss for February.

Japan’s manufacturing index, meanwhile, saw the fastest contraction pace in over seven years with the decline attributed to lower export demand in its two key trading partners — South Korea and China. Incidentally, both of those countries reported a rash of new Covid-19 cases on Friday.

Finance officials from the world’s 20 biggest economies on Saturday called for a coordinated response to the coronavirus outbreak. The International Monetary Fund predicted that the epidemic would pull down China’s growth this year to 5.6% and cut 0.1% from global growth.

“But we are also looking at more dire scenarios where the spread of the virus continues for longer and more globally, and the growth consequences are more protracted,” said IMF Managing Director Kristalina Georgieva said.

China on Sunday raised its death toll from the virus by 150 to 2,592, while total infections reached north of 77,000. According to the World Health Organization, there are nearly 1,100 more cases in 26 other countries.

More economic and social fall-out from the coronavirus might be seen in this week’s data. Later Monday, the National Bureau of Statistics in Beijing will report fixed-asset investment, industrial production and retail sales for January. Predictably, consensus calls for downward revisions in those numbers, which, if realized, could result in a new wave of selling.

Back to Prince Abdulaziz’s call to treat the oil market as a house on fire — the question for oil traders is: how will he put out the blaze? 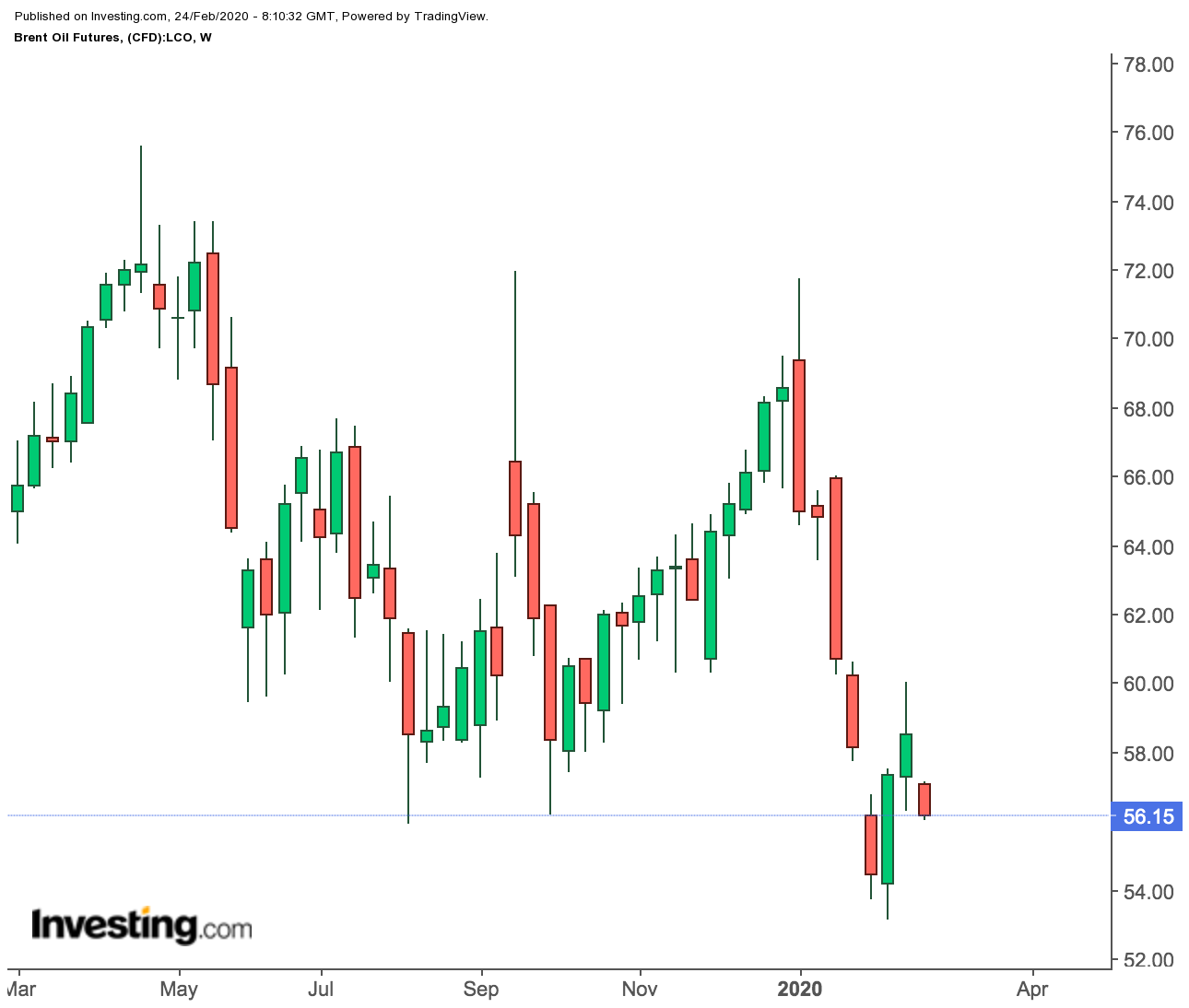 The Wall Street Journal reported Friday that Saudi Arabia, the United Arab Emirates and Kuwait were considering abandoning their cooperation with a stubborn Russia and agreeing to a 300,000 barrels per day supply cut under their OPEC+ alliance — instead of the earlier proposed 600,000 bpd cut that Moscow kept rejecting.

But Prince Abdulaziz rubbished the Journal report, calling it “absurd and utter nonsense.” Energy reporting service Platts also quoted anonymous Gulf oil representatives as saying that it would be “strange” for OPEC to break its four-year alliance with the Kremlin that has worked so well.

Russian Energy Minister Alexander Novak, meanwhile, remained resolute that OPEC+ should not bring forward its March 5-6 meeting to try and find an urgent solution to the hundreds of thousands of barrels of oil demand it was losing a day in China. Novak also described the coronavirus’ impact on oil as “pretty uncertain” and “changing rapidly.”

Indeed, if the Saudis wished to maintain their delicate relationship with the Russians and Moscow wasn’t budging on the cuts, where then would Abdulaziz’s fire-brigade come from?

That’s a question that those long crude have to find an answer to, as they wait another 11 days before the OPEC+ sitdown in Vienna — 11 long days that could see WTI testing $50 lows and Brent under $53, without appropriate action.

Also closely watched will be a report on U.S. consumer confidence on Tuesday that will tell how average Americans have been spending amid the crisis. Other key data is Thursday’s durable goods orders, which is already forecast to be weaker amid the slowdown in Asian factory output and the halting of Boeing’s 737 Max production in mid-January.

European Central Bank President Christine Lagarde is also due to deliver remarks at an event in Germany on Wednesday, while several other ECB officials, including Chief Economist Philip Lane will also give speeches this week.