U.S. soybeans saw the worst loss in 18 months in January, even after the signing of the U.S.-China phase one deal. Now, with the rest of the commodities space in meltdown from the coronavirus scare, soybean futures in Chicago are miraculously up for February, despite the Chinese being the largest buyers of the crop.

But the anomaly is unlikely to last. U.S. soybeans are trading in an alternate reality as plummeting exports of rival produce from Brazil indicate that the Chicago market may be headed for a train wreck soon.

At Monday’s settlement, soybean futures on the Chicago Mercantile Exchange were up for the fifth time in six sessions, the front-month contract finishing at $8.84 per bushel. That was a month-to-date gain of 1.4%, after January’s 7.5% drop — the biggest monthly decline since June 2018. 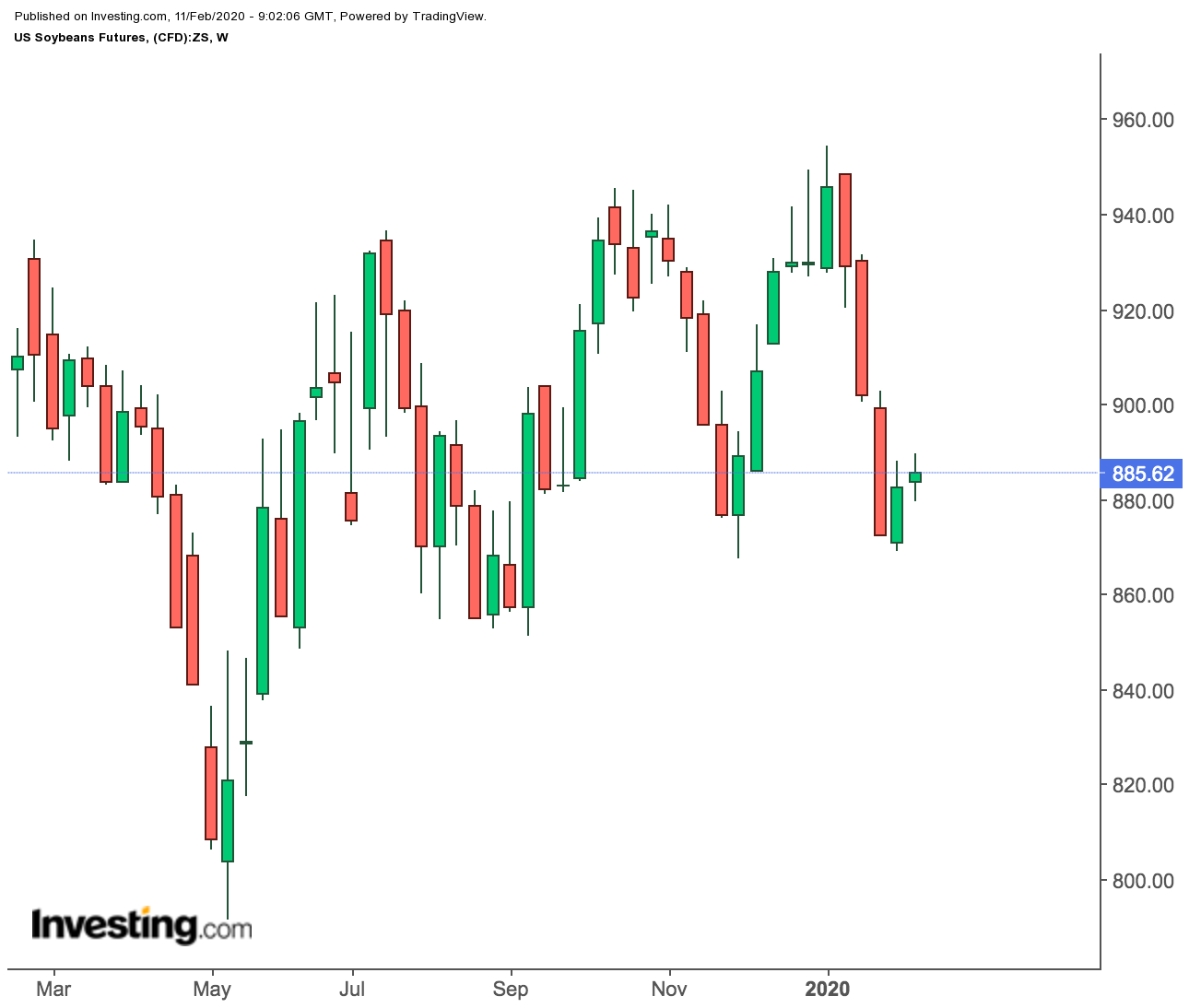 Investing.com’s Daily Technical Outlook, however, calls for a “Strong Sell” on CME soybeans, predicting a near-term of support of $8.69 per bushel — down 15 cents or 1.7% from current levels.

Analysts think that’s a conservative estimate and that the real fall, when it comes, will be a lot greater.

“Future demand for U.S. soybeans will depend on the price in Brazil and Argentina,” said Jack Scoville, lead analyst for grains at Chicago brokerage Price Futures Group.

“Lower prices there will hurt overall demand here — and lower prices are very possible in Brazil.”

Brazil’s exports of soy fell in the first week of February compared to a year ago, according to government data quoted by Reuters on Monday.

Soy exports declined to 198,600 tonnes per day on average for the first five working days of this month compared to 263,500 tonnes for the same period in 2019, Brazil’s Economy Ministry said, according to Reuters.

The ministry did not break down the exports by countries. But the absence of Chinese buying was obvious as they are the largest consumers of Brazilian soy, just like the U.S. product.

“I think the impact will start from the second half of February,” Jose Augusto de Castro, president of the Foreign Trade Association of Brazil, said regarding when the Chinese slowdown is likely to start impacting export prices pf Brazilian soy.

Castro said his association had been bracing for fallout from the coronavirus crisis, but added that it was difficult to predict the scale and duration of the hit.

“It’s still very early,” he said, referring to the pandemic which has killed more than 1,000 people and infected over 43,000 in China, crippling whole cities and industries in the world’s second-largest economy, besides spreading to more than 25 countries.

Roughly 60% of the soybeans produced in the United States are exported, with at least 25% finding their way to China. Even before the coronavirus breakout, those numbers were already under threat as the trade war between the two countries led the Chinese to seek more soy imports from Brazil and Argentina instead.

U.S. Soy Prices Held Up By Producers’ Refusal To Sell

Scoville of Price Futures Group has an idea why U.S. soy prices could be up now — producer reluctance to sell into a market where few want to buy.

“Many U.S. producers have put their soybeans into storage and are not selling,” Scoville said, adding:

“This has caused basis levels to firm in the country and at the Gulf of Mexico.”

Brazil, meanwhile, has been harvesting and yield reports indicate a bumper crop was coming, Scoville said.

Dry weather in Argentina had caused some stress to soy plantings, but the imminent arrival of rains could also boost the Argentine crop, he said.