Sweet Dreams Are Made of This: Sugar On A Six-Month Rally

It’s the stuff that dreams are made of — and with commodities, few have dared to dream lately. Yet for investors who believed in raw sugar, the reality is a market that’s beaten returns in almost every other raw material over the past six months.

New York-traded raw sugar has done so well it trails only palladium — yes, that record-shattering auto catalyst component and the world’s most expensive metal.

For February alone, raw sugar is neck-and-neck with palladium, with both showing gains of about 8.5%. And the sweetener has almost matched another feat set by the precious metal auto-catalyst: monthly gains.

Since August, raw sugar has made a return every month to investors. If that continues in February, it would mark a sixth straight monthly gain — its longest winning streak in nearly 15 years. 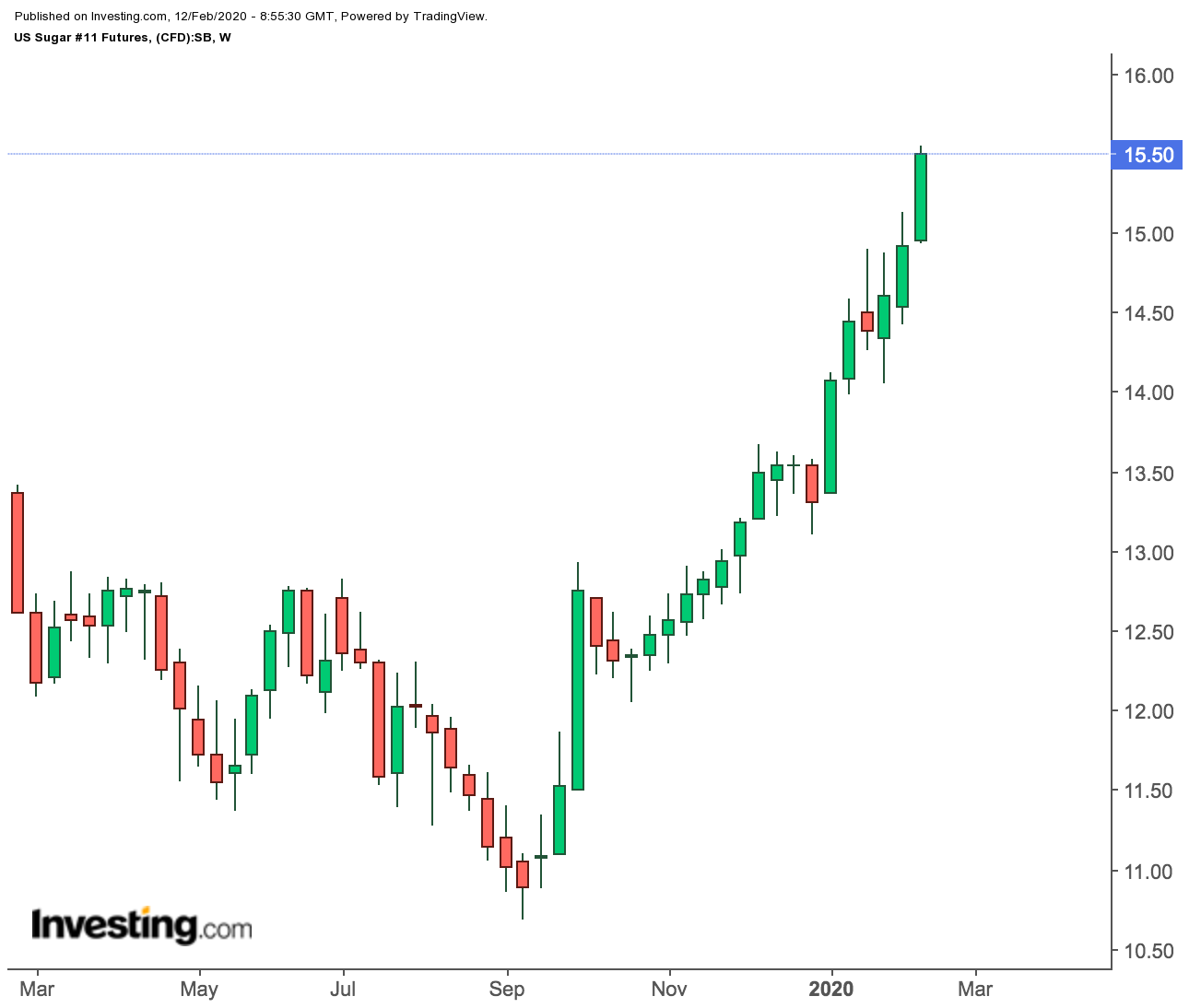 The last time raw sugar did this well was between May 2005 and January 2006, when it rose nine months straight.

So, what’s behind the sugar dream this time? It mostly has to do with fears of shrinking production, particularly in major cane growing countries India and Thailand, say analysts.

“Sugar futures are making solid gains due to reports indicating the size of the global production deficit could be increasing further,” wrote Eric Scoles, commodities strategist at RJO Futures in Chicago, in a commentary Tuesday. Scoles added:

“There has also been strength returning to crude oil which is supportive of sugar due to its use in ethanol.”

Adverse weather conditions for sugar farmers in India and Thailand — the world’s largest and fourth-largest producers of the crop respectively last year — have lifted prices of the sweetener since last year.

Fueling gains this week has been the rebound in oil prices, which had previously been battered by the coronavirus that has wiped out a fifth of the estimated global demand for crude.

Higher oil prices help sugar because one of the crop’s most important commercial by-products is ethanol — the biofuel that’s blended with gasoline, or petroleum. Ethanol is mandated as an auto fuels additive in both top cane growing country Brazil, as well as in the United States.

“Brazil mills continue to favor ethanol in the production mix, although current higher prices for sugar make it economic to open more processing to sugar instead of ethanol,” said Jack Scoville, analyst at Price Futures Group in Chicago.

He said sugar’s supply story has been persistently supportive of the rally since August. “Reports from India indicate that the country is seeing relatively good growing conditions and still holds large inventories from last year. However, these supplies are apparently not moving despite relatively strong world prices,” Scoville said. He added:

“Reports of improving weather in Brazil imply good crops there. Farmers have been selling to mills but the harvest is now almost over so the supplies will start to tail off. Thailand will also have less sugar this year due to reduced planted area and erratic rains during the monsoon season.”

So, how much longer could the run-up last? Investing.com’s Daily Technical Outlook recommends raw sugar as a “Strong Buy,” suggesting a top-end resistance of 15.40 cents.

But with the market’s front-month already breaching key resistance 15.30 on Tuesday, a “big upside potential” toward 16 cents, or even 17 cents, was likely, said Scoles of RJO Futures.

“From a technical perspective, we are seeing a large double bottom pattern on the monthly chart, which is a very bullish indicator,” he wrote.

While the rally looked set to continue, there could also be some profit-taking for a breather, Scoles said:

“It’s possible we can see a rejection at the support point and there may be a sharp pull-back, which will be a risk for those who may be long sugar already.”

“My analysis suggests this market is still strongly bullish however, and a pull-back could be a good opportunity for those looking to enter this market. Timing will be very important.”