OPEC Had Better Get Used to $50-Or-Lower Oil

With Russia finally ending its cat-and-mouse game with OPEC, the world alliance of oil producers hopes to shock the market into a rebound next week by announcing a cut of more than one million barrels per day in output.

No matter what the cut ordained by the Organization of the Petroleum Exporting Countries, the cartel may have to live in an extended period of oil at $50 per barrel or lower as the disruptive forces of the coronavirus continue tearing through the global economy.

As benchmark Brent and U.S. crude futures headed for their worst week since 2016, amid year-to-date losses of about 25% each, Russia emerged from the shadows to say that it wanted to continue cooperating with OPEC on production cuts. 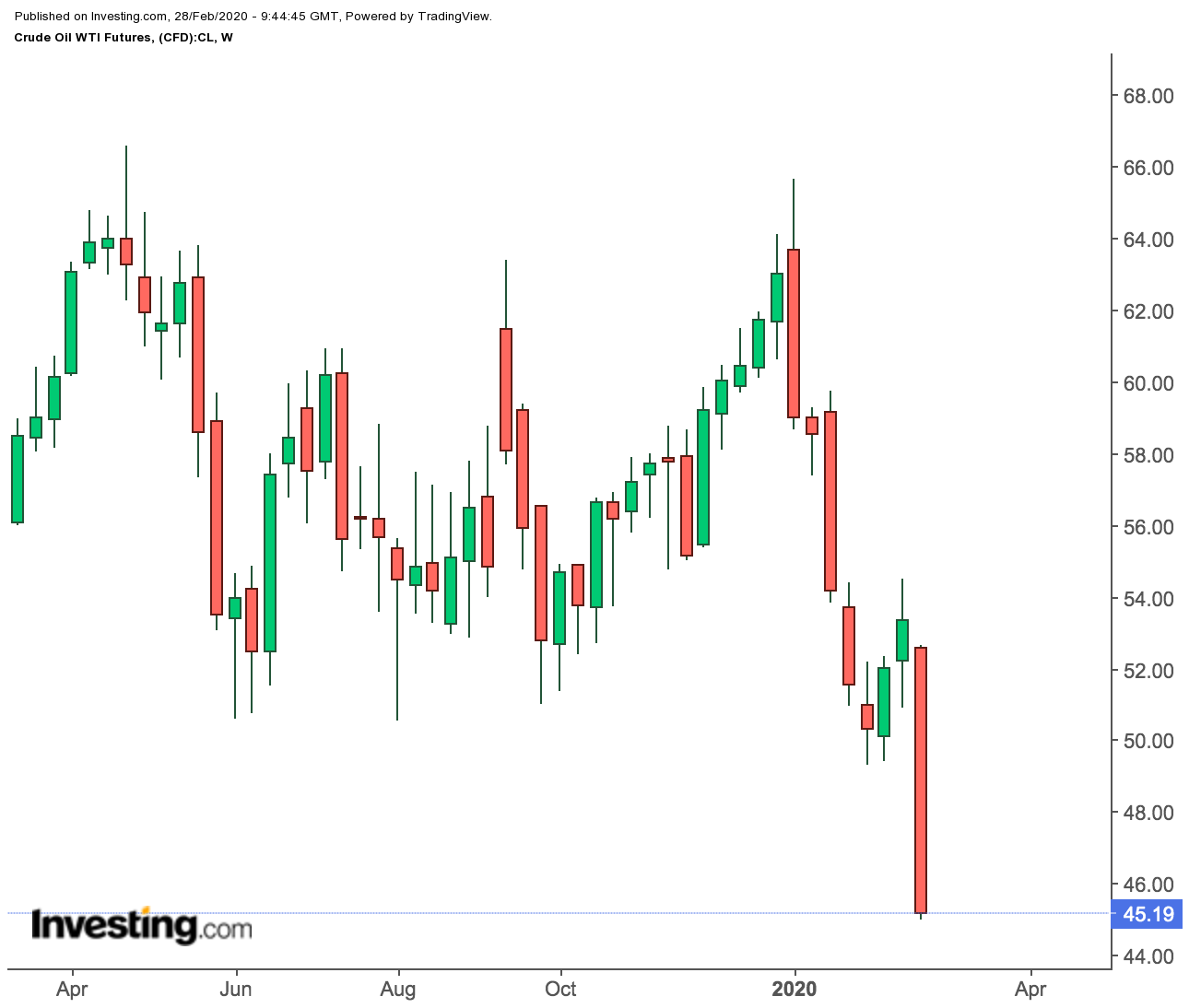 OPEC Secretary-General Mohammad Barkindo also said there was “renewed commitment” in the OPEC+ alliance “to build the consensus for joint action … in mitigating the current hyper volatility in the market”.

The Financial Times followed this up by saying the Saudis were trying to commit those in OPEC+ — mainly, Russia, of course — to a collective production cut of an additional million barrels per day. While the details will likely be known only at the group’s March 6 meeting in Vienna, the takeaway was a cut “significantly higher” than the 600,000 bpd initially proposed.

But This Is A Demand Problem, Not Oversupply

The bottom line is OPEC is treating this like any other oversupply crisis in oil and trying to cut its way out of it. It’s a standard defense mechanism for the cartel — in fact, the only one it knows, the only one it can logically use and the only one that’s worked since its founding 60 years ago.

Output rationing is probably a strategy that will work again for OPEC in bringing the market back up to some respectable level. But it probably won’t happen as quickly as OPEC desires.

In fact, OPEC might have to live with a frustratingly long range-bound period of $40-$50 oil. That’s because this is a demand crisis — unlike the typical oversupply situation the market has often found itself in the past six years, thanks to the U.S. fracking boom and cheap shale oil. 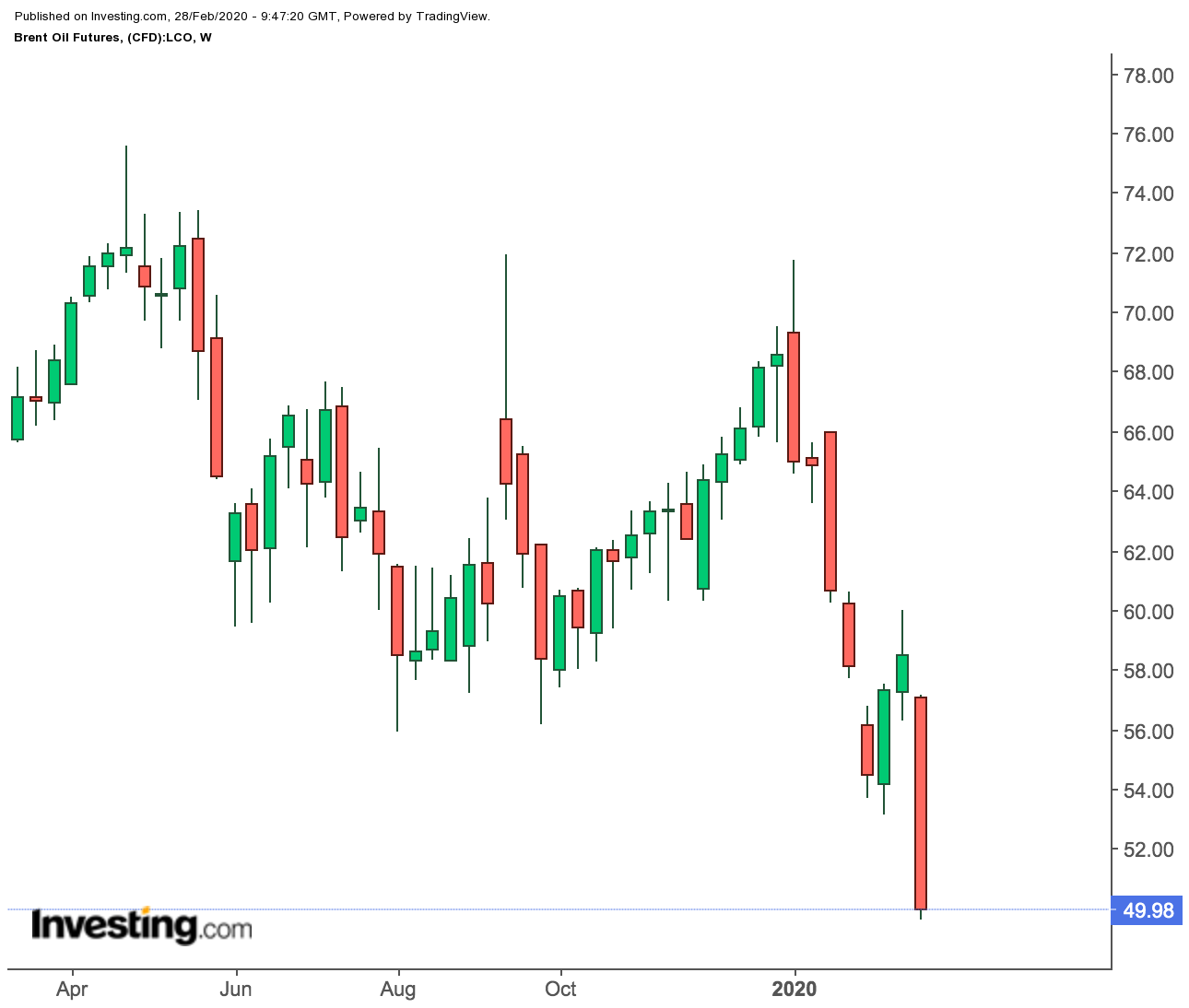 Compounding the problem for oil now is a tottering U.S. stock market that could turn into a bear market in a matter of days or weeks. The correlation between oil and equities cannot be disputed. Wall Street’s continued crash poses a terrifying specter for those long crude, not to mention those who had bet on continued record highs in stocks till U.S. elections in November, when President Donald Trump will be seeking a second term.

To better understand the current situation in oil — and determine how realistic a chance the market has for recovery — a journey back into December 2018 will help. Trapped in another supply glut then forced by Trump’s unexpected sanction waivers on Tehran — which the flooded the market with Iranian oil — OPEC+ announced a 1.2 million bpd cut on Dec. 7 that year.

But it wasn’t until after Christmas 2018 — nearly three weeks later — that the rebound came. WTI still ended December 2018 down almost 11% — not too far from the 9% decline for the S&P 500 that month. From there, in almost mirror-like fashion, U.S. crude and Wall Street’s top stocks gauge moved in unison through 2019.

If the harmony that existed between oil and equities then was valid, the collapse in both now shouldn’t surprise. As OANDA’s analyst Jeffrey Halley noted in his Friday commentary, the market carnage brought by the virus has now hit everything from stocks to bond yields and even the dollar. It simply meant that nothing was sacred and, if anything, things would get worse before they got better.

The December 2018 model of the oil-stocks relationship also gives an insight into the quagmire that possibly awaits crude prices this time.

Fast forward to February 2020 and we have Apple’s guidance that it doesn’t expect to meet second-quarter forecasts; Microsoft’s (NASDAQ:MSFT) caution that it will likely miss fiscal third quarter expectations; and Nike Inc (NYSE:NKE) saying it has closed about half its stores in China while experiencing lower-than-expected retail traffic at the rest.

Can the stock market and oil both be helped by economic stimulus, specifically a rate cut?

Maybe and maybe not, Moody’s Analytics said in a note on Thursday.

The ratings agency said the Federal Reserve may have to restart an easing cycle it ended in December if there were signs that the U.S. economy, which was into a record 11th year of growth, was under serious threat from the coronavirus. Speculation has mounted this week the central bank may announce a half point cut in rates at its upcoming policy meeting in March.

Rate Cuts Might Help, But Not Do The Job Entirely

Yet, given the uncertainty spawned by the virus, “Fed rate cuts may fall short of stabilizing markets,” Moody’s Analytics added.

Breaking down the forecast, it said:

“Our previous assumption that the virus will be contained to China proved optimistic, and the odds of a pandemic are rising. We previously put the odds of a pandemic at 20%, but we now put them at 40%. A pandemic will result in global and U.S. recessions during the first half of this year. The economy was already fragile before the outbreak and vulnerable to anything that did not stick to script. COVID-19 is way off script.”

The implications for oil will be worse if U.S. consumer sentiment — which is responsible for 70% of the country’s growth — tanks. Forget the slowdown in retail or shopping. Simple behavioral changes like not going out to the movies, dinners or canceling travel plans because of pandemic concerns can have a huge impact on the economy — not something OPEC supply cuts can easily solve for oil.

“This is a global crisis that we still haven’t come to see the full magnitude of it. And it could be unlike any crisis really in our lifetime outside of a world war, in that the entire world gets seized up because of the spread of this virus,” New York Times op-ed columnist Tom Friedman said.