Commodities Week Ahead: Oil Looks To OPEC Amid Pandemic; Gold Back Above $1,600

One day at a time: that might be the best advice on how to navigate the oil and gold markets now.

Crude prices look primed to continue their rebound this week from the combination of an OPEC meeting, Syrian tensions, central banks’ stimulus and buying on dips.

Yet coronavirus news that could get worse by the hour might pull Wall Street down again, making it a headache for anyone trying to hold a long position in oil. The United States reported its second death from the virus at the weekend as the global death toll reached over 3,000 people amid infections involving another 88,000 people.

This week’s focus in oil will largely be on the looming OPEC+ meeting that will finally allow the Saudi-led Organization of the Petroleum Exporting Countries a chance to act on production cuts it has been hollering about for weeks.

At the time of writing, OPEC’s two-day meeting beginning Thursday was still on, although there was also talk that it could be off if Russia refuses to play along or delegates pull out on fears over the growing virus contagion.

At least one energy industry meeting was already canceled as of Sunday. The March 9-13 CERAWeek, one of the world’s most prestigious gatherings of oil ministers and top executives from the energy and financial industries in Houston, was scrapped due to delegate pull-out and increasing restrictions on travel and entry by authorities trying to limit the spread of the virus, its organizer said. 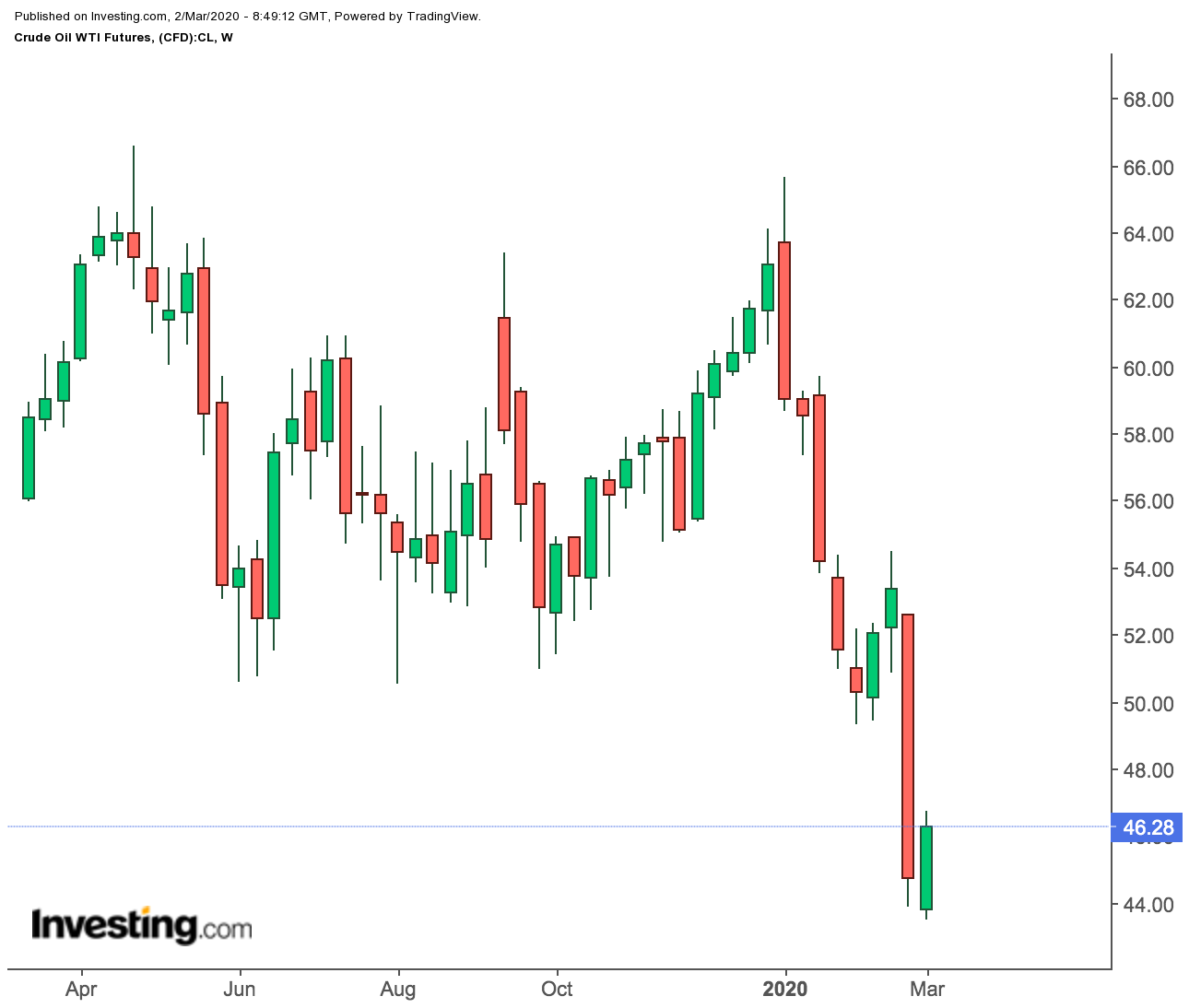 “Saudi Arabia is reportedly pushing partners within OPEC+ to agree on a deeper 1.0-million bpd supply cuts,” said Dominick Chirichella, director of risk and trading at the Energy Management Institute in New York, noting that the alliance already had in principle a deal for a 2.1 million barrels per day reduction.

“This reduction of 3.1 million bpd will be the biggest supply curtailment in over a decade,” Chirichella said.

“It remains unclear whether Russia, the second largest producer within the alliance, will sign on the agreement.”

Besides OPEC, Monday’s market in oil was boosted by a raging conflict in Syria after Turkey shot down two Syrian warplanes and launched extensive airstrikes against Syrian Army positions, reigniting a proxy war that could drag Iran, Russia and possibly NATO into an extended conflict.

“Although the coronavirus effect has the potential to inflict more losses on oil prices as OPEC+ sits on its hands, an escalation of the Syrian proxy war into open conflict between the major powers in the region could have a much more powerful effect on oil prices,” said Jeffrey Halley, analyst at OANDA.

But U.S. jobs data for February, due on Friday, could bring counter winds. Expectations are for a nonfarm payrolls growth of 175,000 versus January’s figure of 225,000.

Bets that the U.S. Federal Reserve will cut rates over the next two weeks — in what could be coordinated action with other central banks — could also be supportive to oil and other risk assets.

Friday’s late announcement by Fed Chair Jay Powell that the central bank was monitoring risks to the United States from the coronavirus and will use “appropriate tools” to support the economy was the clearest sign yet that rate cuts were coming.

The Fed’s last easing cycle ended in December after three months of back-to-back cuts of a quarter point each.

Bank of America says it expects a half point cut at the Fed’s next meeting on March 17-18. Goldman Sachs sees at least two more cuts after that through June.

Despite such positives, there’s still a possibility that coronavirus fears could prove to be the greater factor next week, especially if there’s a spike in U.S. infections or fatalities. Then Wall Street could plumb to the further depths seen during the financial crisis. At that point, the valid question to ask is how much more could oil lose? 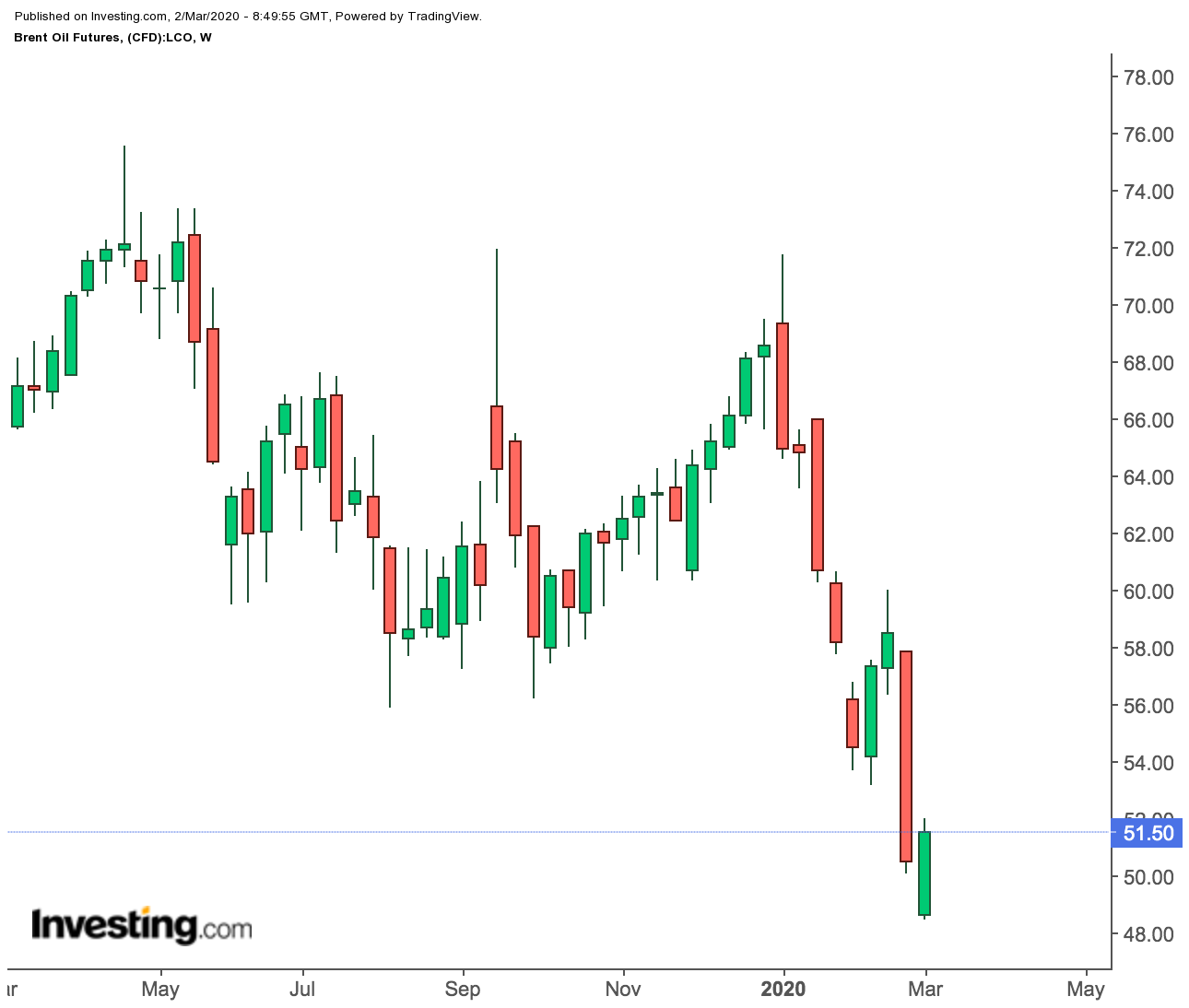 Gold, meanwhile, is expected to make up for last week’s unexpected loss suffered by believers in the safe-haven.

With world markets crashing and burning on Friday, gold was the one asset everyone expected to rise. Yet futures of gold and spot prices of bullion fell by more than 3% each on Friday as hedge funds cashed out earlier gains in the yellow metal to cover losses elsewhere. 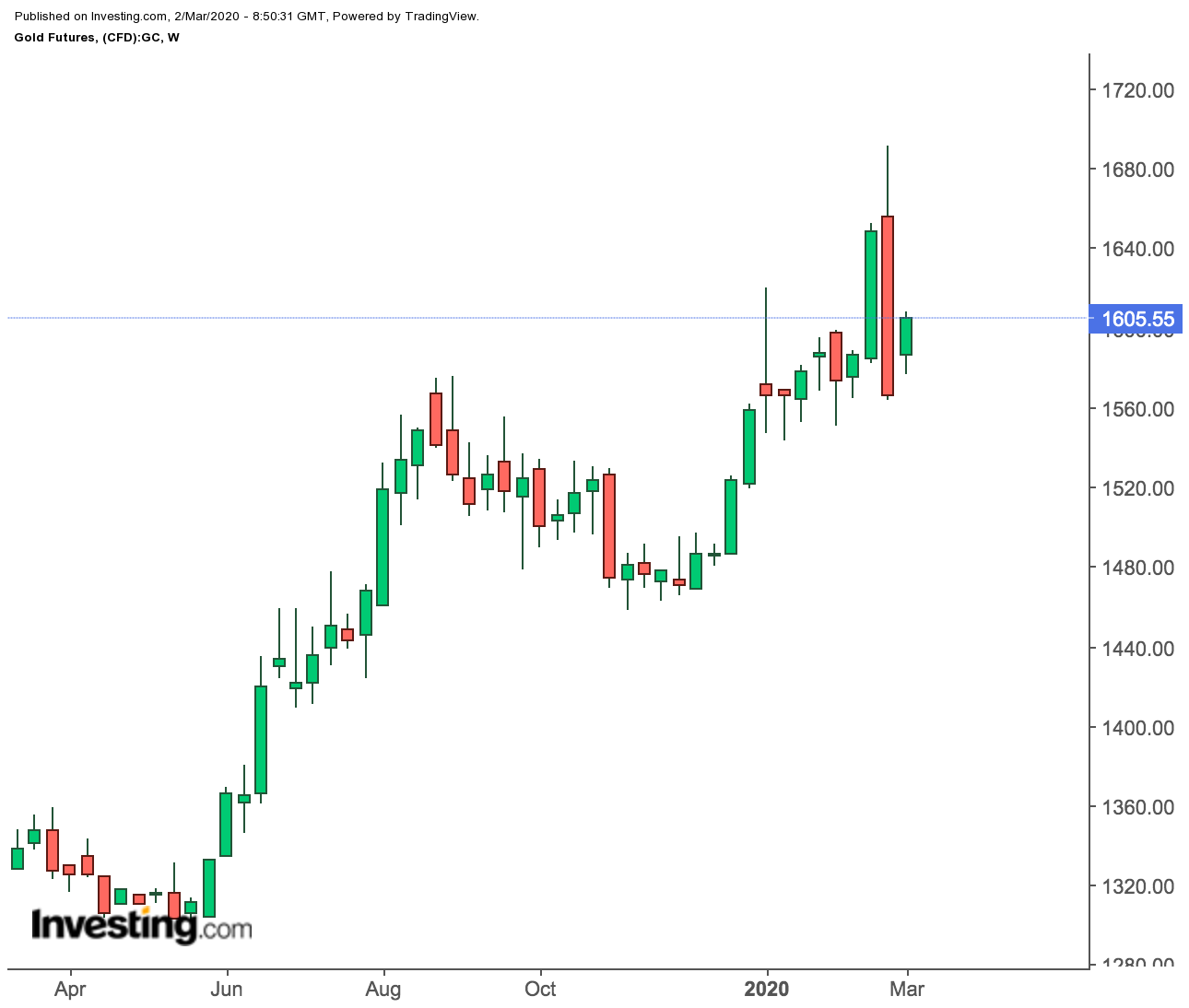 Higher margin calls imposed on gold trades also shook out some longs out of the market.